Memorial Room of the Composer and Conductor Jindřich Praveček

The composer and conductor Jindřich Praveček was born on July 28, 1909 in Výprachtice near Lanškroun. In addition to his teaching duties, his father, also Jindřich Praveček, was an active musician. Besides a small orchestra he also founded the Praveček String Quartet, which performed in various towns of East Bohemia. After the young Jindřich graduated from the municipal school in 1919, the Praveček family decided to move to Česká Třebová, where it was easier to ensure better education for the children. Three years of study under one of Třebová’s teachers, a certain Mr Kolář, prepared Jindřich to perform even technically demanding compositions in public. At that time he also played with his father in the Orchestral Association in Ústí nad Orlicí, where he frequently played alongside native-born son and violin virtuoso Jaroslav Kocian. In 1928, Praveček completed his studies at the realschule and the music school, at the latter by holding a graduation concert where he played the Violin Concerto no. 4 in D Minor by Henri Viextemps.

After leaving school and following a brief period spent at the Military School of Music in Prague, he was appointed a military bandleader. In September 1932, Jindřich Praveček enrolled for studies at the Master School of the State Conservatory, in the violin class of Professor Jaroslav Kocian. There he took conducting lessons with the outstanding teacher Pavel Dědeček and composition lessons with Professor Jaroslav Řídký. A year later, Lieutenant Praveček was transferred to Cheb, where he became leader of the 33rd Infantry Regiment Band Doss Alto.

His artistic career began with a performance of Smetana’s cantata Czech Song in collaboration with the singers association Hraničář. He graduated from the Master School in 1935 and was subsequently active in military bands in Košice, Brno, Hradec Králové, Prague and Cheb. In the autumn 1945, First Lieutenant Jindřich Praveček was appointed head of the Military School of Music in Prague.

After February 1948, Jindřich Praveček was transferred to Brno as bandleader of the local Garrison Band. He set up the Czechoslovak Army Central Band. During his time working with military bands he also wrote his own compositions. Along with Karel Pádivý, he published a comprehensive work on orchestration and lectured at the Janáček Academy of Music and Performing Arts. In 1956, he was asked by the management of the famous musical instrument manufacturers AMATI Kraslice to work with their newly set up youth orchestra as artistic adviser. After years of hard and patient work, he, along with conductor Karel Hájek, led the gifted ensemble to prestigious victories in international competitions - in Kerkrade in the Netherlands in 1970 and on a triumphant journey to the United States.

In these years Praveček fully developed his organizational, composing, conducting and orchestration activities. He worked as a guest conductor with leading brass orchestras, was a member of juries in competitions at home and abroad, and a representative of Czechoslovakia in the International Confederation of Popular Music Societies. He helped establish many festivals of brass music - from Kmoch’s Kolín through Kolet’s Rtyně to his beloved Praveček’s Lanškroun - and regularly took part in them. He was respected by hundreds of ordinary amateur musicians, with whom he always enjoyed an extraordinary understanding. Jindřich Praveček is among the foremost figures in the field of brass concert music.

His distinctive compositional style is unmistakable, as is his sensitivity to the native sounds of his country, his ardent melodiousness and masterly orchestration. He was a conductor distinguished by a never faltering absolute pitch, clear gestures, natural authority and a gentle sense of humour; he was an experienced teacher and a stern, but always fair juror. He is the author of extensive works on brass bands and orchestration, and wrote 159 compositions. He died at the age of 90 on February 11, 2000 in Pardubice hospital.

Thanks to its audio-visual technology, exhibition visitors can listen to compositions by Jindřich Praveček and recordings of current Lanškroun choirs, ensembles and orchestras. We would like the Memorial Room of Jindřich Praveček to become a meeting place for musicians of all generations who will continue to commemorate a man who dedicated his life to music and promoted Czech music throughout the world. 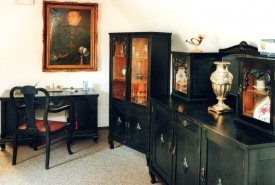 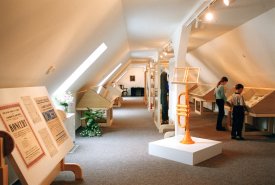 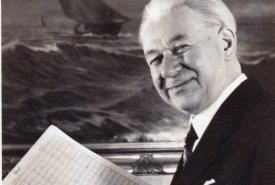