Glassmaking in the Border Country between Bohemia and Moravia

In October 1999, a permanent exhibition entitled From the History of Glassmaking in the Border Country between Bohemia and Moravia was officially opened. The museum’s intention was to make the region’s forgotten history of glassmaking accessible to a wider audience. The exhibition pays tribute to the craft of glassmaking while also demonstrating the basic raw materials needed for manufacturing glass - wood, quartz, limestone and potash. Visitors are given a vivid impression of a ​​forest glassworks in the period from the 15th to 18th centuries, the working conditions for glassmaking and the history and development of individual types of glassmaking furnaces. The exhibition also displays glass makers’ tools, which have remained almost unchanged through to today, and reveals the location of individual defunct glassworks within the Mladkovský and Červenovodský glassmaking circles, noting their affiliation with the estate and the conditions in which they operated. The core of the exhibition is a comprehensive collection of glassworks products made in different historical periods - from the Renaissance to Art Nouveau.

A special place is occupied by the famous Schürer glassmaking family, headed by Dominic Schürer. He was one of very few glassmakers ever to be given a noble title for his artisanal and artistic skills. He built Mlýnický Dvůr into a significant economic, social and cultural centre that had close ties with Moravia, Kladsko and the rest of the western part of the Orlické Mountains. It is the first comprehensive presentation of the regional core of glassmaking production in the border country between Bohemia and Moravia, and identifies and locates the old glassworks and other major economic and social structures which played their roles in the rich and dramatic history of the local glassmaking industry. The museum’s newly created independent exhibition of glassmaking repays just a small part of the debt we owe to this craft that has made Czechs famous the world over. 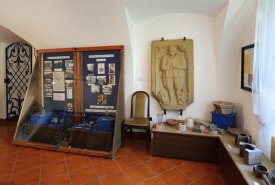 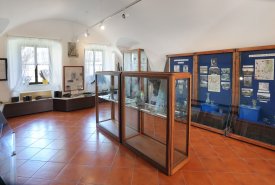